There are a lot of similarities to preparing for adoption this time as there were last time - lots of paper work, a little bit of stress, nervous anticipation.  But this round is covered in much more contentment.  The dire baby ache is not there (which is refreshing), but instead I feel perfectly fine waiting on God's timing - whatever that may be.

I have been surprised, however, how many interactions I've had with people who don't know good adoption etiquette or positive language.  I LOVE talking adoption, and if you are genuinely interested, I'll glady discuss about every aspect of it very openly.  But some times people are just awkwardly nosy.  Here's a little helpful chart from Adoptive Families: 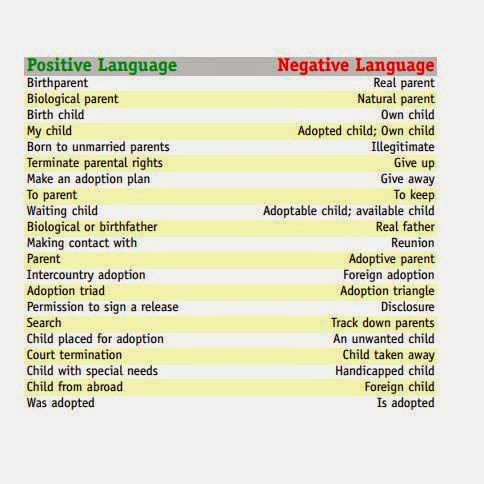 HOWEVER, this video hits the nail on the head.  It's from Rain City Church, filmed and edited by Spencer Findlay, and they say:

If the embedded video doesn't work, click this link to watch it over on Vimeo.

(Also, don't worry, friends and family, you aren't the culprits I am speaking of.  It's more of the general public, and in all fairness, I don't think anyone is trying to be hurtful.  I just thought this video was a fun way to look at it!)
15 comments:
Email ThisBlogThis!Share to TwitterShare to FacebookShare to Pinterest
Labels: adoption, open adoption

We were driving from church to my grandma's house for Easter dinner yesterday when we realized we had let a major ball drop.

"So Levi," I asked, "when you were sitting with Arlene in church this morning, did you sing along?"

"No, I didn't."  He replied.  Voice normal, but spoken matter of factly.

"Oh, why not?  You knew some of the songs.  We practiced them on Friday!"  I said, thinking about the million times I had sung the chorus of "Jesus Paid It All" with him on Friday morning, which led to some intense conversations, which is another story for another day...

"Well, I just feel like I hate music," Levi told us without skipping a beat.

Herb and I looked at each other.  Okay, he's just a three year old and he recently learned the word hate as being the opposite of love....I hate the Steelers, I love everyone, but I hate bad guys.  Not my favorite word to say, and not one that we encourage the use of, but it's a reality and he's just figuring out when that word is appropriate, right?

"Buddy," we asked, "Why do you feel like you hate music?"

I played through a few scenarios about where this conversation could turn, and with each following word he spoke, I realized my worst scenarios were in fact the ones he was referring to.

Well, to be honest, jaws and hearts dropped. too.

We have been worried lately that Levi is not loving the fact that Herb and I play on worship team together and during that time (rehearsal), Levi plays cars or colors or plays with the iPad for an hour at the foot of the piano.  He's a pretty great solo player, but it's hard to find a grown up to take you potty when they're singing and playing instruments.

So, quick!  Before my child begins to hate the one THING I love in this world more than any other THING (not people, thing)... we have to intervene.  After some conversation, we've decided to STOP taking Levi to rehearsals and make sure we have a (fun) babysitter for him on those evenings.  Additionally, I'm going to scale back my worship team participation from every week to every other week so that I can hang out with Levi and hopefully shop him how fun it can be to worship in the congregation.

I'm a little panicked because I can see how the "PK" thing happens...this is how it starts.  I don't want to push my son away from church and faith and worship because I'm too busy with one ministry that I neglect my most important ministry (motherhood).  I realized this morning that I didn't give up a career to be with Levi just so I could fill up my time and distract my focus from him with a million other little obligations.

Have you and your spouse every served in ministry together?  How do you balance that with a family?

This is the day I decided I wanted to be a mom.  It was July 2008, I was visiting Lauren in California, and in my most recent call with Herb, he said he thought we should think about starting a family.  It was so random, and so exciting.  Overwhelmed, I walked around in the water, praying over and over again, "God, I don't want anything to do with parenthood unless this is YOUR plan.  Please make it obvious what you want us to do." 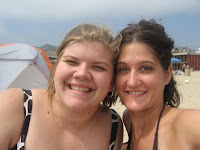 As we struggled with fertility and discussed adoption options (which was only 6 months later, we kind of expected to go down this road), I had to constantly remind myself of that first prayer of giving God the power in our family planning.  I have often felt helpless, and actually still do, but there is comfort knowing I can trust HIS plan, HIS timing.

So, here we are, 2 years after deciding to start a family, 1 year after beginning the adoption process, and 8 months after receiving our homestudy approval.  When the baby is born, we will be so close to having had waited for 9 months, that it is eerie!

Like I said in my last post, in May, when I was feeling particularly overwhelmed with the thought of beginning another school year without being placed with a baby, our small group committed to pray every day, for 30 days, that we would receive a baby before school started in the fall.  The fact that the baby is due on the second day of school tells me that God has a sense of humor!

Last week at the beach, I had another big moment at the ocean.  As my sister-in-law Sarah and I talked about the ache in my arms that could only be filled by a bundle of joy, I jokingly threw my hands up in the air, and shouted toward the ocean and at God, "I'm ready!!"

And here we are, one week later. So many people have told me that last week they felt the need to pray for me/us more than normal, and they didn't know how low I was!  They didn't know what God was orchestrating.

J had us in mind to be the parents of her child months ago.  While I was shedding tears and feeling hopeless, she was thinking of us.
No comments:
Email ThisBlogThis!Share to TwitterShare to FacebookShare to Pinterest
Newer Posts Older Posts Home
Subscribe to: Posts (Atom)