Levi's preschool has an annual Thanksgiving Feast.  All the three year old classes are assigned Pilgrim or Indian hats (which they make).  They stand on the stage and sing a few songs, and then join their parents in the cafeteria for a feast of chicken nuggets, mashed potatos, and corn.

You can imagine my delight when Levi's class was the last to file on to the stage, which means they would be in the front row.  Easier to see, easier to take pictures.  I was really excited to watch a little kid show from the audience, as compared to my years as an elementary music teacher where I was the one responsible for the show. 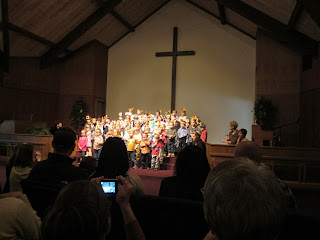 Levi walks in with his class, and it's clear he didn't realize what "audience" meant.  He is looking all around, but not necessarily for Herb and I - I don't think it's crossed his mind yet that we'd be there.  We were sitting in the third row, and when he finally spotted us, his eyes lit up and he waved.

As the children all found their spots on the stage and got adjusted by the teachers, they all were silently grinning and waving like made men.  Cameras were in the air, flashing to my left and right, and Levi just keep smiling at Herb and I. 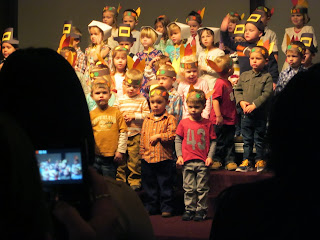 Herb and I looked at each other.  Surely that wasn't our child who was yelling from the stage. 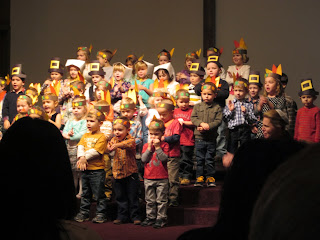 At this point, I was already choked up from the sheer adorableness of my son in his first show, so when he started calling out to me, I could do nothing but hang my head and laugh hysterically.  But it was the "I have the giggles in the middle of the sermon" kind of laugh.

Then Levi, who must actually be a little Amish, realized that everyone was taking pictures of what he perceived to be himself.  I should
mention that lately he won't smile for the camera, and in fact turns his head to the side if he sees one.

He looks at someone in the front row, who was probably taking a picture of their own kid, and says,

Shortly later, the singing started, which of course was adorable.  There was one OMG moment when a little girl fell off the back of the risers, but poof, just like that, she was back up with a smile on her face.  Obviously there was a teacher sitting right behind here.

After a few songs, the students sat down in their spots and one teacher began reading them a Thanksiving book.  Once again, everyone was quiet, except one child, who shall remain nameless (itwaslevi). 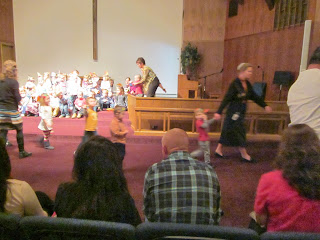 I only wish I had these outbursts on video.

We joined the class for the feast of potatoes, corn, and nuggets, and I coerced Levi into one posed picture. 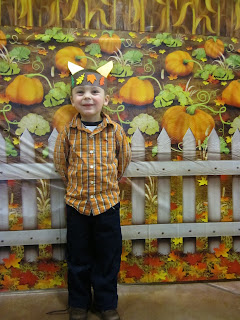 It was a fun morning.
Email ThisBlogThis!Share to TwitterShare to FacebookShare to Pinterest
Labels: Levi, thankful, two year old hilarity