You guessed it, today is Levi's 8 month birthday!


I didn't mean to be one of those monthly update people, but I found that it serves my own purposes well, if nothing else.  I'm not doing a traditional baby book for Levi, but a detailed picture/scrapbook and I tap into these blog posts for milestones and memories. So, today, on his eighth month birthday, while Levi takes his first nap of the day, I will record his current life! 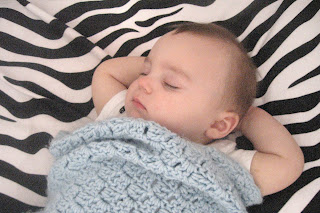 Speaking of naps, he is taking two naps a day.  They are usually around 9-11am and 2-3pm.  He goes to bed between 7 and 8pm, and wakes up at 7 am.  Depending on the day, and our outings, sometimes there is a third short nap.

Levi takes a bottle at 7:30am, 11:30am, 3:30pm, and 7pm.  He eats cereal at the first feeding, and a Gerber baby fruit or veggie at the second and third feeding.  We've also added Gerber puffs to his diet, which serve purely as a distraction during our dinner time (6pm), when he's hungry and I'm prepping a bottle/food, or during church.  He has also eaten noodles, rice, banana, and some other softish things.  We still have yet to find a food that he won't devour immediately. 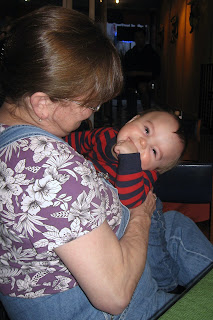 He is still very sober at times, but easily breaks into giggles and smiles.  He still prefers to be wherever the action is and is content to watch people and just look around at things.  He is also VERY content to play alone sometimes on the floor.  He is facisinated by the handles on the desk and entertainment center.  His hair is sandy blond/light brown. It is starting to grow past his ears on the the sides. The top pieces of hair are about an inch long.

Last week we moved to a 12 month size clothing. I guess technically it's 9-12 month.  When I put it that way, it doesn't make him seem all that huge.  He weighs a whooping 23 lbs (92nd percentile) and is approximately 30 inches long (59th percentile). He is in size 4 diapers and size 2 shoes. 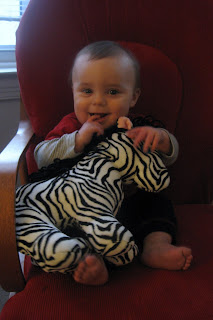 As far as milestones go, I keep saying he's going to start crawling "this week."  But I think I've said that for three weeks now.  I am in no hurry for him to get mobile, but he is great at moving from sitting to a crawling position and back to sitting.  His two top front teeth broke through the surface this weekend.  I thought it was a little funny that they came at the exact same time, whereas the bottom teeth were a few weeks apart.


The teething process was rough in the last week and he was pretty grumpy during nap and bed times. It seems to have subsided now that the teeth have broken through the surface. We were worried and stressed over the lack of sleep that Levi got last week, but mostly concerned for his well-being. 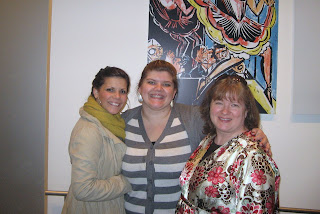 I had a “mommy-getaway” weekend in April, and Herb had a really good time having Levi to himself for two days. 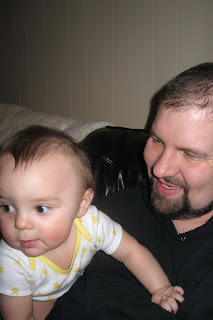 On a personal note, I was really sure I would be "sad" as Levi grew, wishing him to stay little forever.  However, I am NOT!  Praise God!  Each new thing he does makes me excited to see what is next.  I love the relationship I have with the little guy, and we are really having fun together during the day.  BEST JOB EVER! :)
Email ThisBlogThis!Share to TwitterShare to FacebookShare to Pinterest
Labels: changes, cute kid