Ack - the more I have to blog about, the less time I spend blogging.  What is that all about?

I'm popping in today for an update for grandmas everywhere - or at least related to my son.  A 30 month (or 2 and a half years old) update!  And because I want to be detailed and remember this toddler minutiae  I'm going to make this a thorough bulleted list.  You're welcome.

Can I just say this kid is my very best friend.  I mean, friend that I can't have an actual meaningful conversation with.  But definitely a huge source of encouragement and companionship, which are two very important aspects of friendship, right? 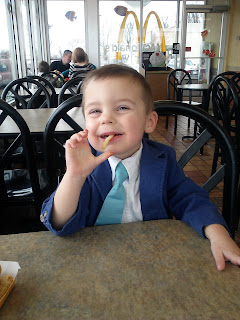 Eating and Sleeping Habits. He's definitely 2.  He eats a ton...but only every other day.  One day he shoves everything in his mouth, the next day he barely ingests anything but juice/water.  His favorites include vanilla yogurt with a few sprinkles on it, macaroni and cheese, hot dogs, pickles, apple juice, and anything sweet, but he's pretty good about trying everything.  This morning Levi had his first cup of coffee and loved it!  (Well, mostly milk!!) 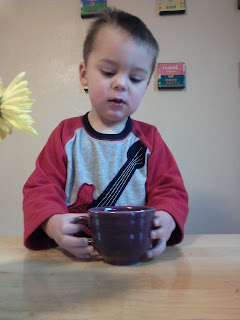 The transition to a new bed and new house destroyed his great habits, and the freedom being out of the crib is definitely abused at times.  I would say a "normal" night is sleeping from 8:30pm to 7:30am, and waking up 2 times during the night because he's wet or can't find his pacifier.  And when I say wet, I mean really wet.  I'm thinking evening drinks need to be totally cut out, but it's not like he drinks that much at night anyway.  We tried a night or two without the pacifier, but that was not a battle I felt like fighting at this point. He's still a wonderful napper (2-3 hours every day, like clockwork).  We did have to rearrange his room because one night when I checked on him at 10:30 (after being in bed for hours), he was sitting on the floor, bedroom lights on, and quietly playing with cars.  Suffice to say, he can no longer reach the light switch from his crib. 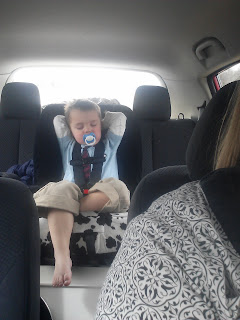 Physical Appearance. You've seen him, right?  He's freaking adorable.  Like, people stop me in the store adorable.  Okay, maybe it's just because today he requested to wear a neck tie and had cute little spiky hair. 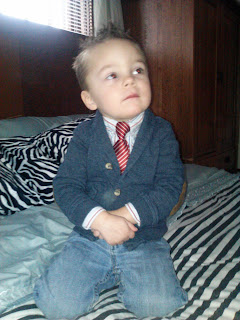 The cowlick in the front of his head is giving me grief - I can never decide if it's better to keep his hair longer or shorter because of it.  Good thing his hair grows fast so I can try all the options!  Right now it's short, and then we put pomade in to spike it, followed by (organic, lol) hair spray - which he likes.  He calls it "tickle spray."  And he surprisingly gets a kick out of having spiky hair.

Personality.  If I had to describe Mr. Levi in one word, I'd probably say "sensitive."  And like all sensitive males, sometimes it's awesome, and other times, not so much.   He is incredibly thoughtful and empathetic - Mommy are you sick?
Why are you crying?
Why is the baby crying?
Mommy you look so pretty.
Thank you for....the stairs, the food, the car ride, etc.
I love you so much.
These are very common things to hear in our house.  The flip side of the sensitive coin is that he's easily frightened and nervous, clingy, and shy to try new adventurous things (he got a power wheel for Christmas and won't touch it).  I do want to affirm his boyhood in other ways though - he loves a good wrestling match, all things cars, and treats any stick/ruler/toilet paper roll near him like a baseball bat or hockey stick.  He is beginning to show interest in what he wears (the neck tie today, the hockey shirt yesterday), and is starting to do chores around the house (cleaning up on his own, helping mommy put things away, etc). 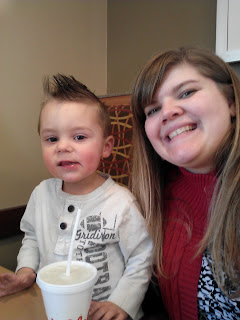 Playing/Interests/Intelligence. I commented when he was 10 months old about his "engineer mind."  Definitely still there.  He gets involved with one toy or activity and will happily be occupied by it for 30 minutes.  Usually it's cars.  From my understanding, there are several three year old bench marks that have to do with ordering toys, etc, that Levi has hit months ago already. 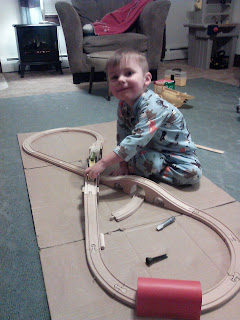 His memory is incredible.  He remembers places, things people have said, and things about TV shows that sometimes I can't even remember that he learned in the first place.  He talks CONSTANTLY, 6-7 word sentences being pretty much the norm.  Every night, Herb and I exchange funny stories of things Levi has said.  He is oh-so-entertaining.  Stay tuned for more episodes of "Things Levi has said." 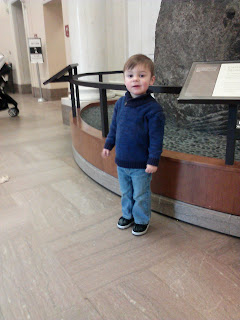