So you all know we brought Levi home on Tuesday, October 12, but now, here is a little back story.  It is a whirlwind, so hang on!!

Wednesday, October 8 I received this email from a co-worker:

I just "needed" to let you know that I heard your song THREE times last night ...I stopped myself to listen to the words -- really listen. They're amazing, and perfect. Then on my way home I was switching stations and there it was again... I had to, again, listen to the lyrics. About 5 minutes later, it came on again.

I don't know why I'm "telling" you this, but if I've learned one thing about God's plan for us is that He TELLS us so many things when we're not really listening. I don't know if I'm SUPPOSED to share this with you, or if it's supposed to MEAN anything to YOU or ME, but I'm throwing it out there. I felt good listening to it. I felt HOPE.

So, for the first time since my heart was broken in August, I listened to the song again.  And the following words stood out so much to me that I just had to make it my facebook status:

I might have to wait, I'll never give up. I guess it's half timing, and the other half's luck. Wherever you are, whenever it's right, you'll come out of nowhere and into my life...And though I can't see every possibility, somehow I know it'll all work out.

And then, just a few short hours later, something came out of no where and into my life. We found out there was a possibility to adopt the baby we had grown to love and adore (that we hadn't ever met); my world turned upside down.
From Wednesday to Sunday, everything was up in the air.  Would be become parents soon?  Was this just another false alarm? We went to Scranton for the weekend to celebrate the wedding of a college friend.  We had a wonderful time away, but by this point we were feeling less than hopeful about things on the adoption front because we hadn't heard anything since Thursday.
Finally on Monday afternoon the phone rang, with a number that made my heart leap.  Amy, our social worker, told us the baby would be ready for us to pick him up the next morning.  I think she was as thrilled as we were!  But then craziness kicked it - we had less than 24 to prepare for parenthood.
-I read 4 chapters of "What To Expect Your First Year." I felt like I was cramming for the biggest test of my life.
-I cleaned the entire house, justifying I might not ever have time to clean again (which may be true).
-Herb and I made a 1am trip to Wal-Mart to buy wipes, formula, bottles, and soda.  Amazingly, we had everything else we needed!
-I made lesson plans for a sub for the week.
-I realized my clearances were at school, so after going to bed at 3:30am, I got up again at 5:30am to run into school (which is an hour away), and get home again in time to go to the adoption agency (45 minutes in the opposite direction).
It's funny how you deal with pressure and find different things important.  As we were gathering our diaper bag and car seat to head out to pick up the baby, Herb and I painstakingly discussed for at least 5 minutes which cds we should take along.  "What music should the baby hear from us first?"  We ended up with Dashboard Confessional, Relient K, Switchfoot, Eric Hutchinson, and Wow Worship.  Ironically, we were so enamored on the drive home from the adoption agency that we never even listened to the music.
My mom was able to come along in the morning when we met the baby for the first time.  As we pulled into the adoption parking log, I started crying, and just knew that when I saw him for the first time I was going to lose it.  Surprisingly, I did not!!  I saw him sitting there, asleep, peaceful, and precious, and something in me clicked.  It was go time.
Midway through signing paperwork at the agency, the baby began to cry, and Amy said, "Well this seems like a job for the mommy!  Why don't you hold him."  And by the grace of God, our first interaction was seamless.  He cried, I comforted, he quieted, and Herb and I finished promising to care for him in the very best way we knew how.
Before we left the agency, we snapped our first family picture with our social worker. 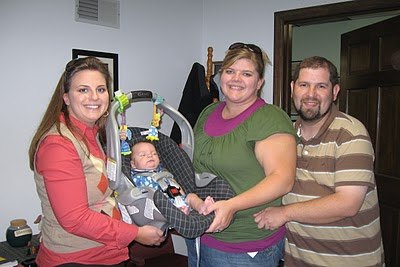 It is such a strange feeling to finally have something so precious that you've wanted so badly for so long.  And honestly, I don't think I have room to ever complain about anything ever again.﻿
Life is full; thank you Jesus.
Stay tuned for the next post which may or may not address the cutest baby on the face of the earth, the most supportive family and friends ever had, and the most adoring, sweetest, caring, nurturing husband-turned-father ever created.
Email ThisBlogThis!Share to TwitterShare to FacebookShare to Pinterest
Labels: cute kid, open adoption