Welp, yesterday was officially Levi's last birthday that I'll celebrate before his first real one (did that make sense?). In thirty more days, we'll be measuring his age with years instead of months.  Craziness folks.  But let's not jump the gun. Here's the stats on my almost one-year-old: 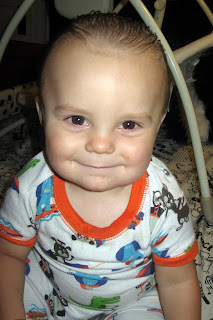 Eating and Sleeping Habits: No changes here, except maybe sleeping a little longer than normal at times because of teething.  I am enjoying trying new recipes for baby food, and Levi enjoys eating them!
Development at this time:  His bottom two molars have surfaced, which puts the tooth count at 9.  He has stood alone for up to 20 seconds, but mostly just walks along holding onto things or crawls to get where he wants to go.  The majority of his crawling is still with one leg dragging on the floor while the other one pushes up with the foot.  He babbles all the time and is putting two sounds together.  He tries to echo us sometimes, but mostly just copies our inflections. I think he said "choo-choo" yesterday.
Physical appearance: Levi wears 18 month and is stretching out now from all his activity.  His hair was long enough to trim up this month around his ears; not an official first hair cut yet, just a few hairs around the ears.  His feet are growing too, he wears a size three now (still small in
proportion to the rest of his lanky little body). 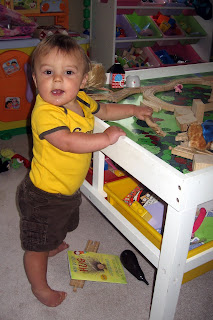 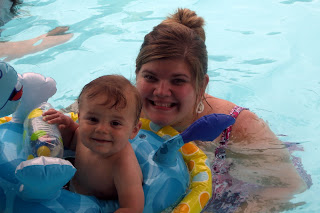 Personality:  Hide and seek is becoming a great game for Levi, he loves to peek around the corner and then look away again.  He is all about getting tickled and trying to grab power cables.  He is still a little clingy and follows us around when we leave the room. 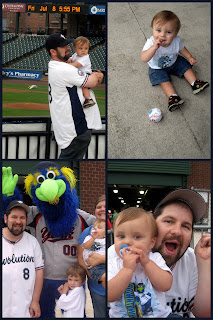 In general, this kid is awesome and I am finding that I really do think each new phase/age is the most fun! 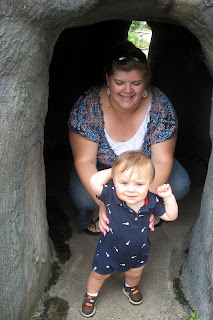