When You See A Clingy Baby

If you've encountered Levi and myself in real life lately, you've probably noticed he's not too keen about anyone holding him.  Not grandparents, aunts, uncles, friends, and sometimes, not even daddy.   This is a new development, as he's typically been a very social baby and happy to be held by whomever.

This past weekend we were around a lot of family for Herb's grandpa's funeral, and I know Levi was probably perceived as clingy and maybe even a mama's boy.  At first I was feeling insecure, thinking maybe somehow this represented a parenting fail on my part.  However, I was assured me this clingy phase is perfectly normal. 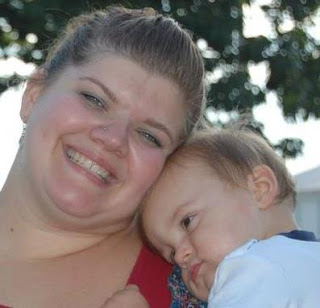 But beyond "normal," I realized Levi's attachment is something so much bigger and so much more wonderful than just a phase.

Levi's attachment to me is nature responding to nurture.  His longing and desperation to be held by only his momma in fact proves that I really am his momma.  Through nurture, I have filled the role that naturally I wasn't designed to be.  Isn't that neat?  He doesn't care that we don't share DNA or an umbilical chord; he knows I will meet his needs and hold him when he cries.

The next time he fusses and stretches out his arms to me as someone else tries to give him a cuddle, I will be grateful and allow my heart to be filled with warm fuzzies... I am his mom.
Email ThisBlogThis!Share to TwitterShare to FacebookShare to Pinterest
Labels: open adoption, parenting