Today marks Levi's half birthday - one and half - eighteen months - definite toddler hood.

Half birthdays aren't a huge deal around here, but Herb and I both got to do some special activities with him in the last two days (Herb took him to a hockey game, I took him to an indoor pool, both of which he loved).  This morning we had some very hard to come by family time and all went out for breakfast. 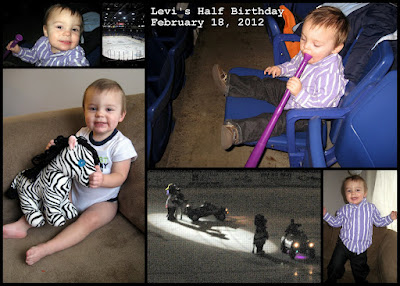 I have been pretty terrible taking pictures, writing in his baby book, and making videos in general, which is a shame because this is a really exciting time in the little dude's life.  Thank goodness for this blog, where I can keep myself updated on his benchmarks and milestones, share that with our family, and have it recorded for later when I get to catch up in his scrapbook.  So, if you're not into "this is what Levi's up to lately" blog posts, check ya later!
Mealtime:  Levi is back to his normal eating whatever we offer him phase.  He went through a picky stage around Christmas, but I think he is back to his usual inhaling self.  It seems like if he is having a picky spell at a meal, if we offer him the spoon so he can feed himself, he jumps on it.  Another thing he loves to do is to dip things.  Apples in yogurt.  Pretzels in yogurt.  Veggies in ranch.  Pasta in sauce.  Apples in ketchup.  If it dips, it works.

Sleep:  He started fighting the afternoon nap, especially on the days he took a two or three hour morning nap (no surprise).  So after refusing naps for a few days, we are purposefully keeping him awake until after lunch for one nap. Typically, he goes to bed at 8pm and gets up at 7:30am.

Other Developments: Levi loves climbing stairs, ottomans, chairs, and toilets.  He's learning about jumping, and still loves  great splashing session in the bathtub.  Last week he started telling us when he soiled his diaper with one single p word that ends in oopie.   He will sit on his mini toilet, but doesn't really want to do anything on it.  Although, in his defense, he does hiss at the toilet, as if he knows what sounds he should be making on the pot.  Haha.  He has also learned how to hug and kiss in the last month, which his momma loves.


Playing: Levi's top five favorite things to do right now (yes, they are in order):

5. Playing with (crashing) cars
4. Building (mostly throwing or knocking over) blocks and legos
3. Watching Sesame Street (thank you Netflix and SesameStreet.org)
2. Playing outside, with his coupe or swinging/sliding board
1. Reading books

Words words words:  I'm thinking his hard core love of books is really helping his language explode.  It seems like every day there are 10 new words and he's really good at repeating things we tell him to say.  Just for fun, and baby book prosterity, Herb and I made a list of all the words Levi has been saying these days (things that he actually knows, not just repeats): 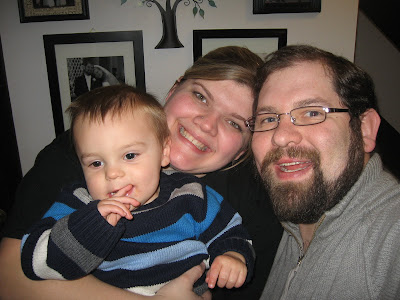 So, I know I say it at every phase, but this REALLY REALLY is my favorite season of childhood so far.  Happy birthday, little buddy.  I'll save the sappy stuff for bedtime.  We love you!
Email ThisBlogThis!Share to TwitterShare to FacebookShare to Pinterest
Labels: cute kid, family, hope fulfilled