After writing a post last week where I made all these modern conveniences (disposable diapers, air conditioning, clothes dryer) sound just like that (modern conveniences) and not complete lifelines, I thought I should give an update.

Thursday night, just hours after I posted, Levi had a monstrosity of the evening and completely abused the tile floor at a friend's house.  Bodily functions, multiple times, at least one pair of pants in the trash.

The next day I bought a pack of pull-ups.  I caved.

They are my sanity.  I'm trying to be disciplined and only use them when crapped pants would completely wreck my day.  For instance - we used them at Hershey Park on Monday, and a wedding on Saturday. However, I told Levi that they were just a different kind of underwear and he still had to use the potty. 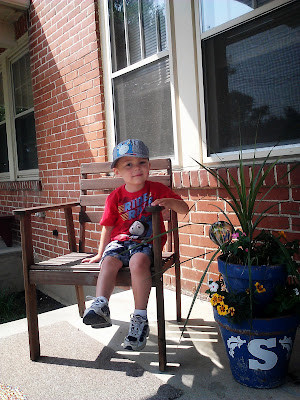 In case you're looking for a potty training update - I think we're almost there!  The last two days have been completely accident free, and even during nap time.  Still using a (cloth) diaper or pull up for naps and night time, but I'm almost ready to use the term "Potty Trained."

The other caving I did had to do with the air conditioners.  I told Herb we really should install them because we are having company this weekend, but I was so grateful to have an excuse!  Heat is one thing - it can be combated with shade and ceiling fans.  Humidity is a totally different ball game and I was over it.  Last night I had the best night of sleep in a long time in my cool room!

So, just a little post keeping it real.  June Clever, I am not.
Email ThisBlogThis!Share to TwitterShare to FacebookShare to Pinterest
Labels: making house a home, toddlers