Love Brought You To Us

Monday morning, at the dentist, I told the assistant (who had many questions about adoption) that the birthmom who chooses us is doing so because she loves her child and wants the best for him or her.  I stopped by Ollie's on my way home, and saw the dearest little picture frame that said, "Love Brought You To Us."  I didn't buy it, because I'd been feeling particularly hopeless in the adoption waiting game.  In fact, last week when we were at the beach I reached the lowest of all low points (despite how cute our family looks in this picture!). 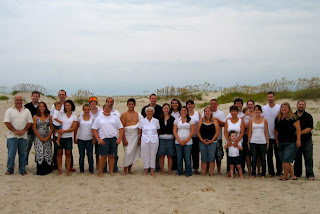 When I got home, I lied around feeling mopey.  Cramps, tootheache, baby ache, dread of the end of summer.  I was expecting a phone call from Doug, who is going to replace our bathroom floor.  After I spoke with Doug (who was on his way over), and got settled back on the couch with my popcorn (I know, bad choice on the day of a filling), the phone rang again.  Knowing a potential birthmother was picking up our profile today, of course my hopes got high, wondering if it was our agency calling.
And it was.
In the time it took me to identify the number and actually answer the phone, I thought of at least three reasons for them to be calling us, not related to being chosen by a birthmother.  One of them being our clearances are out of date.
Turns out, I was wrong.

"Michelle, this is Kiley...do you have a minute? J has looked at profiles and really likes yours.  In fact, she found you and Herb online several months ago, and now that she has seen your other profile, her choice is confirmed.  She is not interested in meeting any other families at this time, but would like to meet with you and Herb."

Cue the hysterical bawling ugly cry on my part.

Some time next week we are going to meet with J, join her at a doctor appointment, and make plans for the future.  J and I have been emailing each other nonstop since Monday afternoon, and it is so incredible to think that she has had us in mind for months.  She was drawn to our profile because of the style of which we presented ourselves, and our musical interest.  She also wanted a family who had no children, and could not have biological children.

After I got off the phone with Kiley, many thoughts ran through my head.  How should I tell Herb?  Who should I call first?  Should we wait to tell ANYONE until it's a firm YES?  Get those clearances NOW.
Write down everything you are feeling on the blog, you're not going to want to forget this.  I want to meet J today! I am incredibly petrified of this meeting!  My God is amazing.  Wonderful.  I don't think we're going to be going to Pittsburgh for Labor Day. :) I walked by the nursery and got chills... 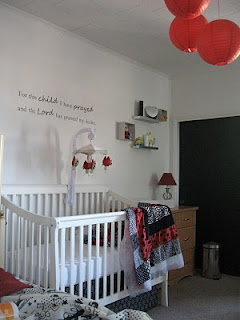 So, my next step was to get our clearances ready to go.  I messed around with them for a while, and then emailed Jess to see if she was free for a few hours.  I filled her in on the phone call (and the subsequent emails from J), told her to bring her totally sweet camera, and we were off on our adventure!

Next stop, Ollie's to pick up the picture frame I spotted that morning.  I didn't know what I was going to put in the frame, but I knew I wanted to use it to tell Herb he was going to be a daddy.  While we're standing in Ollie's, J emails me again to tell me that the baby is a boy, and attached an ultrasound picture. 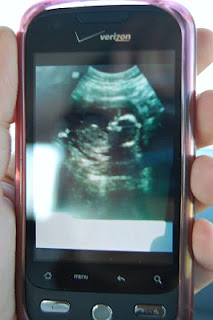 We high-tailed it to target, got that picture printed out, picked up a onsie that said "I Love My Dad," and headed to Lancaster to suprise Herb at marching band rehearsal. 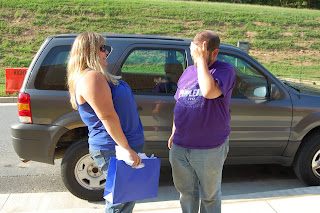 Herb was surprised, thrilled, excited.  The best part is, the whole thing was caught on film.  In case you missed it before, check it out! 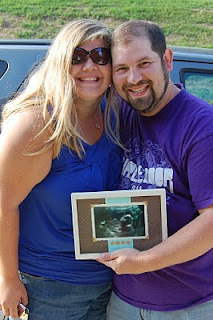 Herb had to go to rehearsal that night, but he told me to go tell my family, so Jess followed me around like papparazzi while we told the future grandma, auntie, and uncle.  Mom thought the ultrasound picture was just a sample in the frame, then she thought it was my future neice/nephew, then she realized just who it was and started crying pretty hard.  It was awesome. 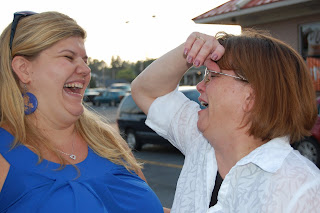 Jocelyn also thought the picture was just a sample, and then when she realized what I was trying to tell her, she needed reassured several times that I wasn't playing a practical joke.  Cue the waterworks!  We took a moment to pose a picture for the first time with the little cousins-to-be. 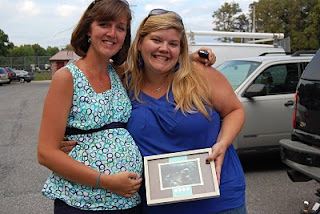 We ended that night with a round of Coors light and tacos, and then swung by Herb's mom's house to share the good news.  I think Denise was suspicious that we wanted to "randomly" swing by at 11:30pm. 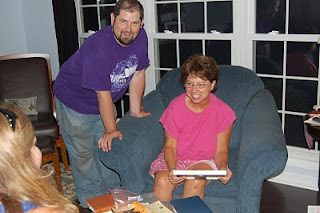 It has now been about 60 hours since THE CALL.  In those 60 hours, I have hardly touched the ground.  I have also not slept more than 8 hours, and barely touched food.  I have visited Babies R Us, visited human resources, organized baby clothing, and made about six million phone calls.  It was foolish for me to mourn the moment - to share this amazing news has proved to be the most emotional and exciting two days of my life.  I laugh, I cry, and I just sit in awe of my God.

And by the way, did you know my small group was praying for us to become parents by the end of summer?  In May, they committed to pray for this request every day for 30 days.

For this child I have prayed, and the Lord has granted my desire...
Email ThisBlogThis!Share to TwitterShare to FacebookShare to Pinterest