This past month was the fastest...and funnest...yet.  In fact, things are speeding by so quickly I am a few days late on Mr. Levi's half birthday update!!  Honestly though, each age is becoming more and more exciting.
We had the 6 month check up last week and Levi is 19.5 lbs and 28 in, which puts him in the 84th and 95th percentiles.  The new joke is that we are planning a move to Manheim so that Levi can be a future football player for the Barons.
I'm trying to keep Levi on a fairly strict schedule, but his naptimes are getting shorter.  It's probably time to switch from three to two naps a day, but I'm not sure how to make that transition.  Any advice? He wakes and eats around 7am, takes his first nap from 8:30 am to 11:30 am, and eats again at 12:00pm, 3:30 pm, and 7:00 pm, with a one hour nap before the last two feedings. 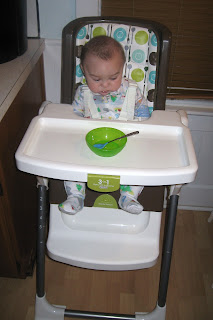 He eats rice cereal during his first feeding, with formula, and a jar of baby food at his last feeding. So far he has tried peas, green beans, carrots, squash, sweet potatoes, bananas, and applesauce. Sweet potatoes seem to be his favorite. He eats 6-8 ounces of formula at each feeding.

And can I just mention that I totally treasure going to a restaurant and asking for "two and a high chair?"  I know I already said that in my last post, but it gets me every time!!  Especially when the little dude looks so cute in said high chair.
As of last Sunday, Levi is sitting up alone and has his first two front teeth cutting through.  He's fussy before bed, but nothing a little Orajel and momma cuddling can't fix.
Although he’s a great roller, he never does so in his crib; he definitely prefers his back. He is quite ticklish on his thighs. He is making more and more noises, but his sounds are pretty much “maaa,” “baaa,” “ooooh,” and “aaah,” although one time he made an “r” and “wuu” sound. His hand-eye coordination is getting a lot better. He can put things in his mouth, and even grabbed a pen and drew on his face before I could stop him one day last week! 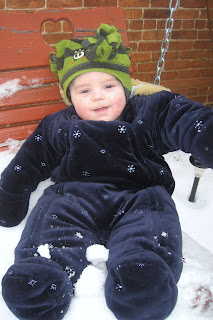 Levi seems to be growing lengthwise right now. His 6-9 clothes are still fitting great, but he’s too long for the changing table on the pack-n-play. His “new” hair is about an inch long on top, and we often spike it using baby lotion.

Our little buddy is very attentive and follows conversation pretty well. He enjoys social situations and public places because of everything he can look at. He is not afraid of strangers, and his happy to be cuddled by mostly everyone, at least for a few minutes, before wanting to go back to someone familiar. He usually smiles when someone acknowledges him and makes eye contact.  And when you hold your hand in front of him, he is kind of able to give a high five.  Thanks, Uncle Josh!
On the more bittersweet side of things, we started attending a new church this month, where Herb is the Minister of Music.  We are LOVING it so far, but were really sad to leave our Small Group, you know the ones that prayed for us to have a baby by the end of the summer?  We're really going to miss them. 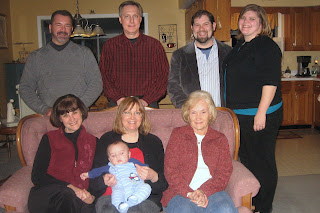 And finally, some pictures of Levi with the ladies... Here he is with his cuz Joelle, and Tristyn, the daughter of my friend Ashley from high school.  It is astounding how many of my friends have children who are within just a few months of Levi's age.  Motherhood is definitely something I want to do at the same time as other people! 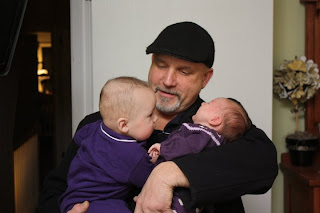 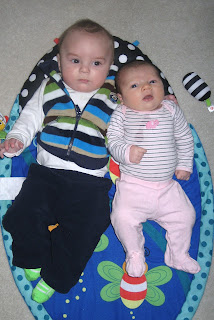