Herb's best friend in the world (besides me) is named Matt.  Matt has a terribly creative and fun wife named Erin.  Herb and Matt became fast friends during the days when Herb wasn't yet sure if I was the one.  They taught drum line together, talked theology forever, and dreamed of starting a church that really focused on Jesus.  Matt stood up with Herb the day we became one, and Matt and Erin have become some of the dearest friends we have ever had (I have since forgiven Matt and Erin for  telling Herb to letting Herb dump me back in the day).

Ethan is their first child, Adin is their second.  Ethan is major hope fulfilled. He is the result of years of longing for a child, a desire granted, and a gift from God.  When he was born, it was the first time we saw any of our friends do "the kid thing."  In fact, they did it with such ease, I blame Matt and Erin for single handedly infecting me with baby fever.  Ethan was the one on whom I learned how to change a diaper and install a car seat.  A few years later, Adin joined the crew, and Matt and Erin asked me to be his godmother.  What an honor!

But this post is not about Matt, Erin, or Adin, this post is about Ethan and the amazing little man he's turned out to be.  We love this kid like he's our own, and Herb and I just shook our head in wonder when we realized he was starting kindergarten today.

So, here's to hoping that Ethan had an awesome first day of school, that he got lots of compliments on the Redskin's backpack from Auntie Michelle, and that somehow my little boy doesn't grow up nearly as fast as this one did. 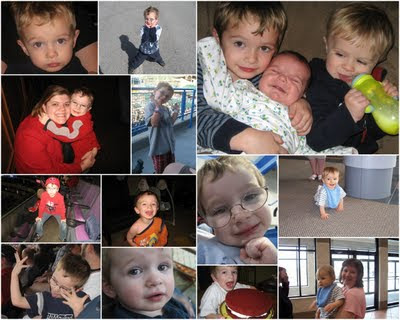