Oh my, what a whirlwind the last few weeks have been.  Everything has been leading up to today, Levi's third birthday, but let's rewind.

Two weeks ago, my sister, Wendi, blew into town via a 15 hour car ride with a cute pup named Annie in tow.  We spent time catching up, eating out, going to Target (of course), and (surprise!) running together.  Oh this girl has my heart.  I never thought I would treasure her as much as I do - I love the way adulthood looks on our relationship.  Maturity, growth, understanding, love.

In fact, I'm super grateful for both of my siblings...but more on that later.

So, at the tail end of Wendi's vacation in PA, her beau, Ethan, flew up to meet us!  Let's call him The Doctor, because, well, he is, and there are no other doctors in our family.  So, Wendi and The Doctor spent some time in NYC and then spent the next night traipsing around the metropolis that is Bowmansville Days.  I'm sure the two are so comparable.

Bowmansville Days was something out of a nostalgic dream.  It's a very small version of a fair - food vendors, games, entertainment, and people watching.  The food was just what we remembered from our childhood and the games were even more exciting.

Lo and behold, when we walked up to the dime toss, there WAS a Garfield mug to win.  And my brother did us proud and WON it.  He may have blew through $5.00 in dimes, but it was worth every penny, er, dime.

The Cake Wheel required a quarter per play.  I put my one and only quarter on number 12 and number 11 was the winner.  The Doctor sauntered up to the board with a quarter and placed in on number 11.  "Don't pick 11," the carnie said, "it just won."  "Nah, I'll stick with it," said The Doctor.

30 seconds later, The Doctor and Wendi were walking away with a homemade shoo fly pie.

To round the winning evening out, with his last of 13 rings, Levi lassoed a 2 liter bottle of Shur Fine soda, and we took home some grape flavored fizzy stuff to wash down the shoo fly pie in a Garfield cup. 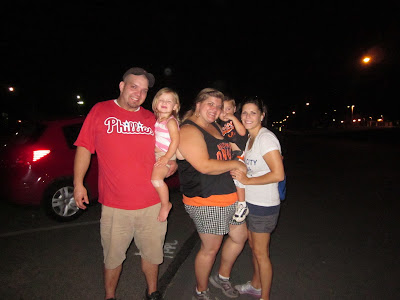 The next night my siblings helped Herb and I throw a banging party for Levi, and then we snapped a few pictures before we left.  My brother and sister mean the world to me and I am praying that the tie that binds us only grows stronger with time.

Also, Wendi, I'm ready for you to move back to PA now.  I think we can handle each other now. ;)

Email ThisBlogThis!Share to TwitterShare to FacebookShare to Pinterest
Labels: sibling