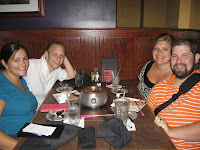 Lately, I have been seeing the positive side of not having recieved a baby yet. As we said goodbye to Isaac over the last few days/weeks/months, I really don't know how we could have formed such a tight relationship with he and Jess if we had had a baby in tow. And I wouldn't have traded those precious times for anything.

I guess what I'm saying is that, I know God has a plan, and it's nice to look back and, as far as time goes, see some things make sense. Losing a friend to cancer at 25, well, that on the other hand, will never make sense.

This week I'm feeling more patient, but at the same time, I'm pretty sure the other night, when I was sitting the nursery saying some prayers, I think I felt my arms physically ache with emptiness.
Email ThisBlogThis!Share to TwitterShare to FacebookShare to Pinterest