Last night, Herb and Levi tagged along for the night shift of hanging out with Baby Lawrence and Aunt Cali.   I told Herb he didn't have to, but he's gotten quite big-brother-protector-ish ever since Cali announced her pregnancy, which is pretty adorable in itself.

As if taking a cue from his newborn cousin, Levi decided that sleeping at night, during bed time, was not cool and not fun.  In fact, 1 week old LJ totally kicked Levi's 19 month old butt when it came to bedtime last night.

After screaming bloody murder in his pack n play for 20 minutes, he finally passed out.  When I checked on him, I realized that, holy cow, he is only about 6 inches from touch each end of the pack n play with his head and his toes.  No wonder he didn't want to go to sleep - he was cramped!

Just around the time the grown ups were getting ready to go to bed (and baby LJ was sleeping), Levi woke up in a cold sweat, screaming, hiccuping, and hating life.  After we finally got him calmed down (and he amazingly and thankfully didn't wake the baby), I tried to put him back in his pack n play, which he was having none of.  Instead, I laid him in the queen size bed (which is against a wall on one side), and he cozied right up to the pillow, put his hands behind his head, and acted like he owned the joint.

I left the room, but insisted that Herb go to bed immediately to make sure Levi didn't fall out (he is able to crawl out of our bed and couches without falling, but who knows what's up when you're half asleep).  I ended up sleeping on the couch because I didn't want to wake the boys in the big boy bed, but Herb said Levi slept contently all night long.

Levi isn't acting like he is going to crawl out of his crib just yet, so I think we have a little bit more time until we need to make the bed transition.  But as for traveling goes, I think our pack n play days are over.

I just keep thinking about this little squirt who liked laying this way in the pack n play: 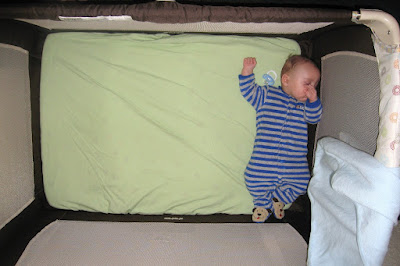